News
You are at:Home»Headlines»Business affairs»An Overview of the Folding Carton Industry in north America
By Chantal Le Roux on 11 November 2014 HeadlinesBusiness affairs 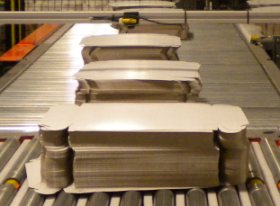 North America saw a consolidation of the folding carton industry in the last years. In 2000, the top 10 producers had a combined market share of 60%. In 2012, the same combined market share was controlled by the top 4. The main players are Graphic Packaging (32%), RockTenn (13%) and Meadwestvaco (9%).

It is anticipated that the global market will grow by 5.1% annually for the next few years, while this growth will only be 1.1% in North America. Lower demographic growth is the main reason for this difference.

Looking for a solution to handle and palletize your carton stacks? Watch this video of Axium’s Robotic End of Press palletizing System