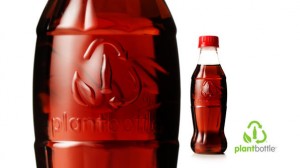 Innovation comes from inspiration, and at The Coca-Cola Company we are greatly inspired by the very people who drink our beverages. Our consumers expect us to deliver the beverages they know and love in a package that meets their needs such as convenience and safety, but also in a package that is environmentally considerate. PlantBottle™ packaging has been meeting consumer expectations since 2009. The first-ever fully recyclable PET plastic beverage bottle made partially from plants looks and functions just like traditional PET plastic, but has a lighter footprint on the planet and its scarce resources.

Since its introduction in 2009, PlantBottle packaging has been distributed in a variety of packaging sizes across water, sparkling, juice and tea beverage brands—from Coca-Cola to DASANI to Gold Peak. Today, PlantBottle packaging accounts for 30 percent of the Company’s packaging volume in North America and 7 percent globally, some 6 billion bottles annually, making The Coca-Cola Company a large bioplastics end user.

PlantBottle packaging is reducing our dependence on fossil fuels and increasing our use of renewable materials. To date, more than 35 billion PlantBottle packages have been distributed in nearly 40 countries. The technology has enabled us to eliminate the potential for more than 315,000 metric tons of carbon dioxide emissions—equivalent to the amount of carbon dioxide emitted from burning more than 743,000 barrels of oil—and save more than 36 million gallons of gas.

From inception, we envisioned licensing PlantBottle Technology to non-competitive companies, based on the belief that we have a responsibility to work with others on solutions to our collective environmental challenges. In 2011, The Coca-Cola Company licensed PlantBottle Technology to H.J. Heinz for use in its ketchup bottles. In 2013, Ford Motor Company announced plans to use the same renewable material found in PlantBottle packaging in the fabric interior in certain test models of the Fusion Energi hybrid sedan. And in 2014, the first reusable, fully recyclable plastic cup made with PlantBottle Technology rolled out in SeaWorld® and Busch Gardens® theme parks across the United States.

Committed to collaboration, in June 2012 and in partnership with Ford Motor Company, H.J. Heinz Company, NIKE, Inc. and Procter & Gamble, we announced the formation of the Plant PET Technology Collaborative (PTC), a strategic working group focused on accelerating the development and use of 100 percent plant-based PET materials and fiber in their products. Together we are supporting and championing research and expanding knowledge toward technology that will enable commercially viable, sustainably sourced, 100 percent plant-based PET plastic while reducing the use of fossil fuels.

While pleased with our progress so far, we’re not fully satisfied. True innovators keep innovating and so our work continues.

We have a goal to convert all new PET plastic bottles, to PlantBottle packaging (up to 30% plant-based) by 2020. In addition, partnering with select biotechnology firms we are working to move from lab to commercial scale in producing a 100% plant-based PET plastic bottle. These companies are helping us make a significant step toward our vision of commercializing PlantBottle packaging made entirely from plant-based materials. After all, our ultimate goal is a 100 percent renewable, responsibly sourced bottle that is fully recyclable.