News
You are at:Home»Editorial»Handwritten resistance
By Chantal Le Roux on 30 April 2015 Editorial 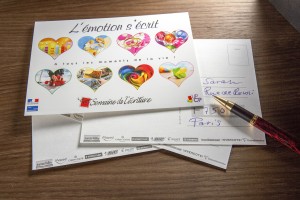 How can we persuade schoolchildren and teenagers to loosen their grip on their smartphones and write by hand instead? Bernard Bouvet is chairman of the Union Professionnelle de la Carte Postale, (UPCP), an advocacy organisation for the postcard industry in France. He may not have all the answers but he is at least practising active resistance. In recent years UPCP has put both itself and postcards on the map by creating the writing week Semaine de l’écriture, which aims to teach schoolchildren the value of writing texts by hand. Iggesund Paperboard has supported the campaign since its inception by providing materials for the postcards used in the various writing activities.

For the past three school years, UPCP has distributed a postcard on a specific theme – most recently it was love – and organised a competition for the best-composed postcard. A specially composed guide for teachers informs them not only about the competition but also about a range of other school activities that can be done with the postcards. The campaign has been successful – in the first school year 45,000 cards were sent out; this year it was 360,000 and next year the plan is to distribute more than half a million cards. And it is the schools that are driving this strong growth trend.

“Personally I believe it is a cultural achievement to promote writing by hand,” Bouvet explains as he waves an elegant fountain pen. “We cannot allow all communication to go via emails and text messages, with the resulting degeneration of the language.”

The postcard activities and the writing week are of course one method of defending the position of physical postcards in an ever-more digitalised world. The postcard industry in France peaked at the turn of the millennium and since then annual sales have fallen by 20 per cent. However, for the past four years sales have stabilised and are worth about 400 million Euro.

Taking greeting cards and tourist postcards together, the average French person sends seven cards a year. As chairman of the UPCP, Bouvet looks enviously at the UK market, where people each send 54 cards a year.

“But they have a different culture in that respect – it would seem that they even send cards when they get divorced,” he says with a touch of French astonishment at the peculiar habits of the British.

Bouvet began his career as an apprentice typesetter at the age of 14 before becoming a photographer of postcard pictures. He remained loyal to postcards until retiring in February 2015. Despite his retirement, he will continue as the chairman of the UPCP throughout 2016. After that, he wants to continue developing the writing week with new forms of cooperation. In his spare time he intends to teach his 18 grandchildren to put aside their smartphones and write more postcards.