News
You are at:Home»Companies»Iggesund awarded for reducing environmental impact
By Chantal Le Roux on 8 December 2014 Companies 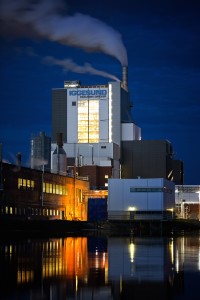 Iggesund has embarked on a substantial initiative to reduce its environmental impact, which is now being recognized the world over. In October, the Pulp & Paper Industry (PPI) presented Iggesund with its “Bio Strategy of the Year” award based on an extensive investment program to reduce fossil carbon emissions.

“For several decades Iggesund has been systematically working to free itself from dependence on fossil fuel; switching the source of energy required to power our mills to bioenergy and, at the same time, increasing our energy efficiency,” says Arvid Sundblad, Vice President of Sales and Marketing for Iggesund. “We are satisfied with what we have achieved and pleased at the signs of recognition from the outside world.”

Strategic investment in a turbine-equipped recovery boiler have made the mill in Iggesund, Sweden fossil-fuel free to roughly 95% and nearly self-sufficient with respect to electricity; and in a biomass boiler at its mill in Workington, England, completely fossil-fuel free and a net supplier of green energy to the national electricity grid. The annual reduction in fossil carbon emissions from both mills is equivalent to taking more than 85,000 cars off the road.

But the story hardly ends there. Also in October, the Holmen Group, which includes Iggesund Paperboard, was elevated to the “A List” of the CDP Climate Performance Leadership Index 2014. The CDP (Carbon Disclosure Project) is an international not-for-profit organization that has the world’s only global system for measuring, reporting on, handling and sharing important environmental information.

Placement on the A List means that the Holmen Group is now one of 187 globally active companies that are regarded as being the most advanced for the actions they have taken to reduce carbon dioxide emissions and to manage the business risks associated with climate change.

Just over a year ago, the Holmen Group was added to the United Nations Global Compact Index, which lists the world’s 100 most sustainable companies. This year’s evaluation results have just been announced and Holmen remains on that list.

“In this context it is important to note that we are a heavy process industry competing with companies like banks and insurance companies, whose biggest environmental problem is the ozone emissions from their office laser printer. Yet our environmental work can easily hold its own against them,” Sundblad emphasises. He adds that this recognition of the group’s environmental efforts is part of everything that Iggesund supplies to its customers.

“Our service has many aspects, ranging from delivery service to knowledge transfer – and we include them all under the concept of Care by Iggesund. This includes having an environmental programme that reinforces our customers’ businesses.”

Holmen, the forest industry group which includes Iggesund Paperboard, is on the UN Global Compact Index of the world’s 100 most sustainable companies.The Group is also on the Carbon Disclosure Project’s A list of the 187 global companies that are models with regard to reducing greenhouse gas emissions. In both cases the Group, which is dominated by heavy process industries, is competing with non-industrial businesses such as banks and insurance companies.