News
You are at:Home»Companies»Saverglass has sold its flacon business to Heinz-Glas
By Chantal Le Roux on 2 October 2018 Companies

The flacon business is based at Saverglass’s Feuquières site in northern France.

Saverglass and Heinz-Glas agreed the deal on Friday September 28th.

Germany’s Heinz-Glas produces bottles and jars for the perfume and cosmetics industry and offers finishing technologies for the glass products. It has 16 locations in 12 countries on three continents.

Saverglass has built up a portfolio of customers and range of its own glass designs in the perfume, cosmetics and home fragrance sector since 1997. And will continue to focus on the super premium spirits and wine bottles market. In June this year it opened a glassmaking facility for these markets in Guadalajara, Mexico.

Saverglass said that Heinz-Glas was the one glass manufacturer in Europe for the perfume and cosmetics range. The existing Saverglass customers are in good hands with Heinz-Glas, Saverglass Director General,  Jean-Marc Arrambourg, said.  Carl-August Heinz said that the Heinz-Glas team feels a responsibility to serve the customers in the future at least as good as Saverglass did in the past.

The Team Heinz-Glas at Luxe Pack 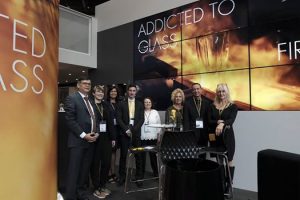